Perry Mason Reimagines the World of the Legendary Television Lawyer

The generation of devoted viewers who watched the weekly courtroom drama Perry Mason in the 1950s and ’60s might not not recognize the new and reimagined Perry Mason in HBO’s upcoming series of the same name. Gone is actor Raymond Burr’s beloved criminal defense lawyer, whose commanding courtroom presence is legendary. This version’s Mason (played by Golden Globewinner Matthew Rhys of The Americans) is a divorced, disheveled, and down-on-his-luck private investigator prone to alcohol and World War I flashbacks. Together with familiar characters Paul Drake and Della Street (who also undergo character transformations), Mason investigates the sensational case of the decade: a child kidnapping. 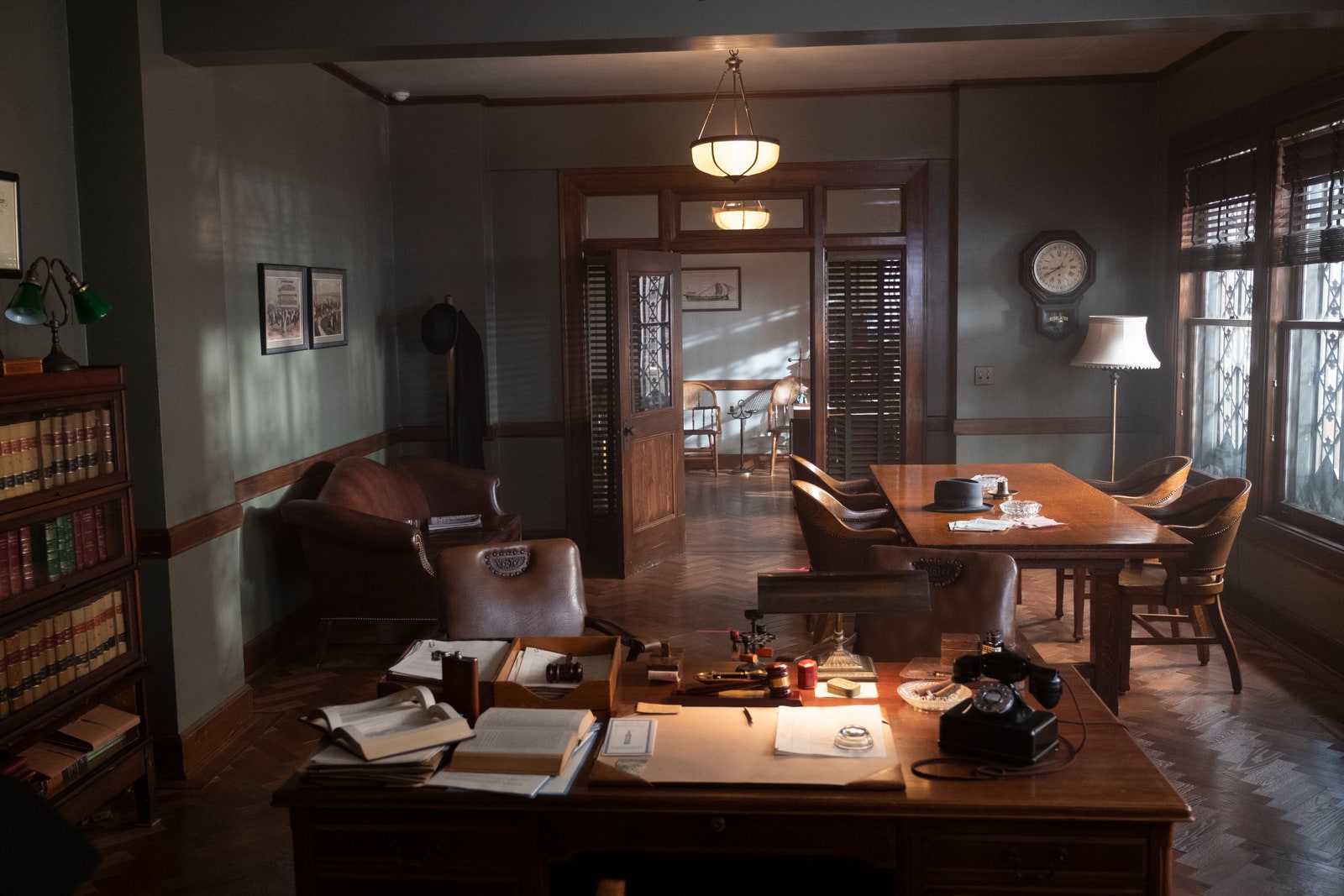 The reboot is set in Depression-era Los Angeles in 1932, and the City of Angels faces the boom of the oil and film industries, as well as a Christian revival headed by Sister Alice of the Radiant Assembly of God (Tatiana Maslany) that plays a large part of the backdrop. Creating the varied and complex worlds fell to production designer John P. Goldsmith, who found inspiration from the 1974 neo-noir Oscar-winning classic Chinatown. “Director Tim Van Patten hosted a screening for the department heads, and there was a kind of ethos about Los Angeles then and Los Angeles in 2020. You can find the bones of things in ’20s and ’30s architecture, but the city is completely modernized with streets, buses, and cars, and you have to edit it all out and strip things down. We saw how they did that in Chinatown,” he says. 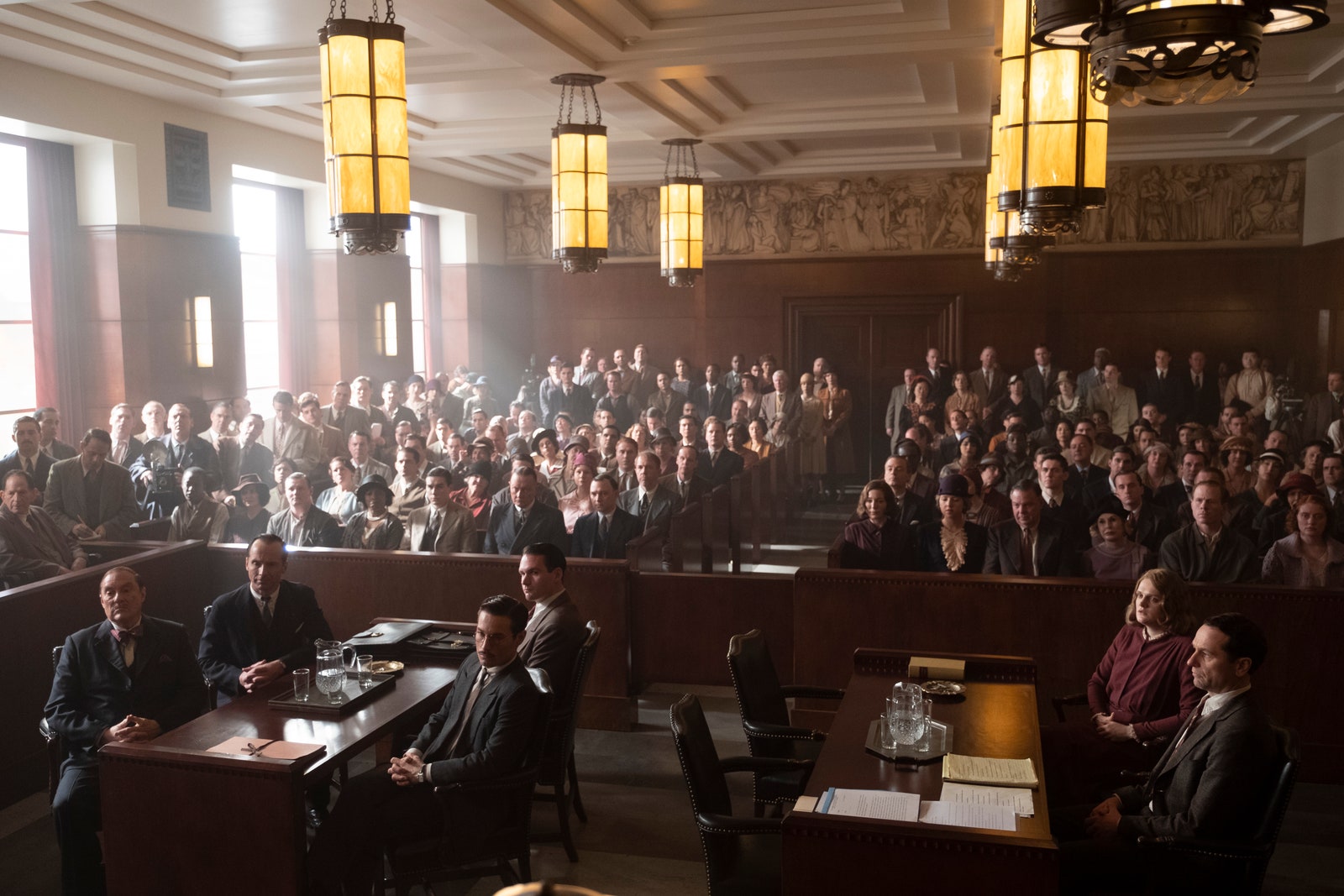 For Goldsmith, designing the various key sets—from a Streamline Moderne–influenced courtroom and luxurious Hancock Park interiors to the dark underbelly of the city—became an exercise in class distinctions. “The houses represented a broad range of contrasts,” says the designer, “and we quickly developed housing typologies to show upper, middle, and working classes.” The sets included locations in a 40-mile radius from Thousand Oaks, San Pedro, and Pasadena to Hancock Park and downtown Los Angeles. “We had 136 locations and 24 stage builds, such as the courtroom, Mason’s farmhouse, the morgue, the jail, the Radiant Assembly Church, and various Hollywood apartments and estates that ranged from Spanish Colonial and Tudor to traditional and Art Deco,” says Goldsmith. The film’s color palette and tone are influenced by Los Angeles artists of the period such as Thomas Hart Benton, Emil Kosa Jr., Millard Sheets, and Maynard Dixon.

Of course, no Perry Mason episode would be complete without a courtroom set. Researching various halls of justice across the world, Goldsmith found inspiration with the architecture of Los Angeles City Hall and with Blenheim Palace in London, a 1930s palatial residence. “Tim and I talked about the advancement of modernity and its progression, and how it was expressed in the courtroom. It shouldn’t feel typically traditional and needed to reflect the modernity that was coming,” he details. Emmy Award–winning set decorator Halina Siwolop (Masters of Sex) created the decor for the courtroom, built on a soundstage. Of particular interest is a hand-painted frieze on the ceiling that provides a contrast against the dark wood benches and wall panels. “It was guided by John’s vision and harkens back to the teens and ’20s, and a moment to represent something more in line with WPA design,” Siwolop says. 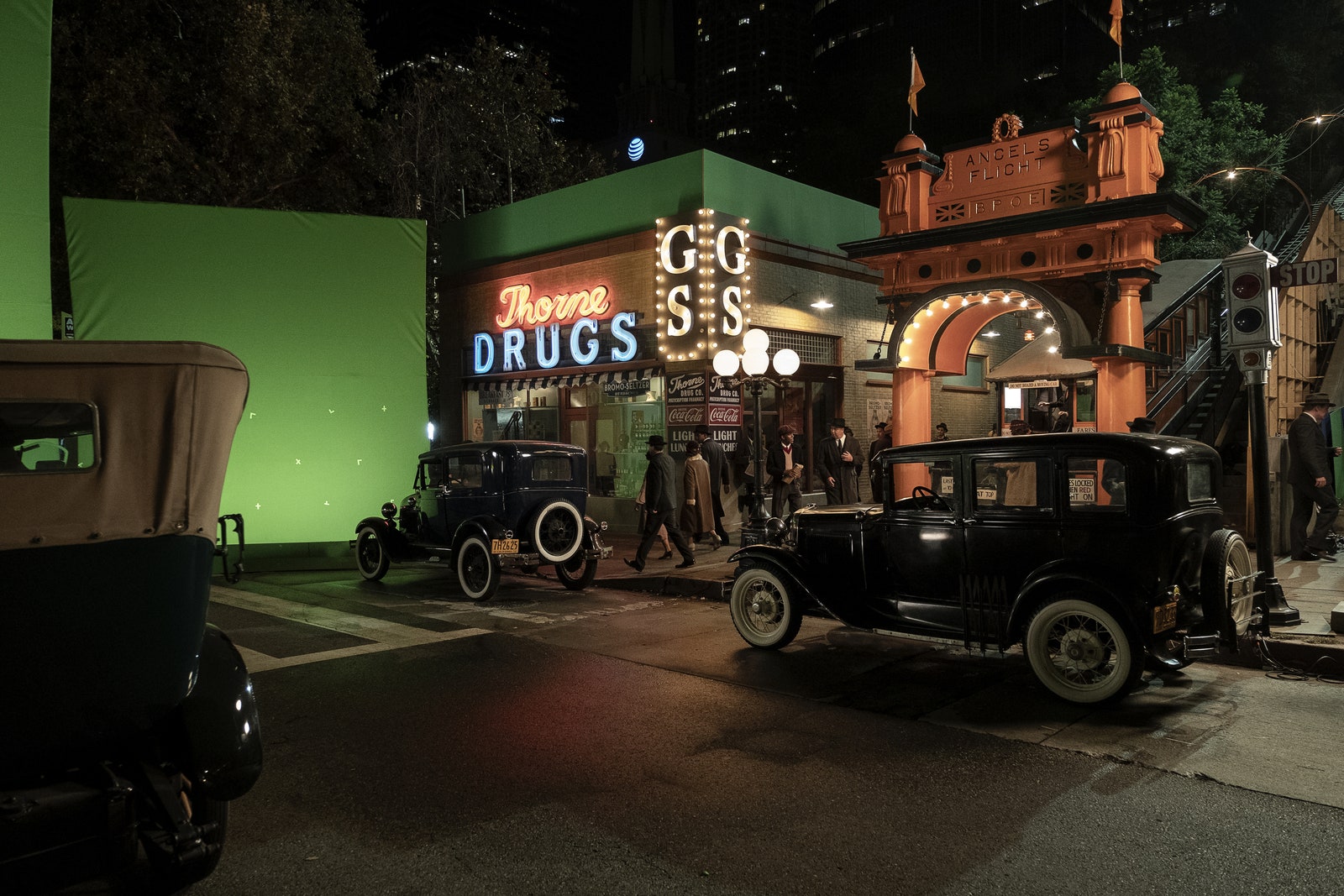 The landmark Angels Flight railway, an 118-year-old funicular transporting passengers up to the Bunker Hill neighborhood, is another pivotal set. Goldsmith and his team replaced the ads on the cars with period placards and built the nearby drugstore via special effects. (Coincidentally, the railway was used in a 1966 episode of Perry Mason.) 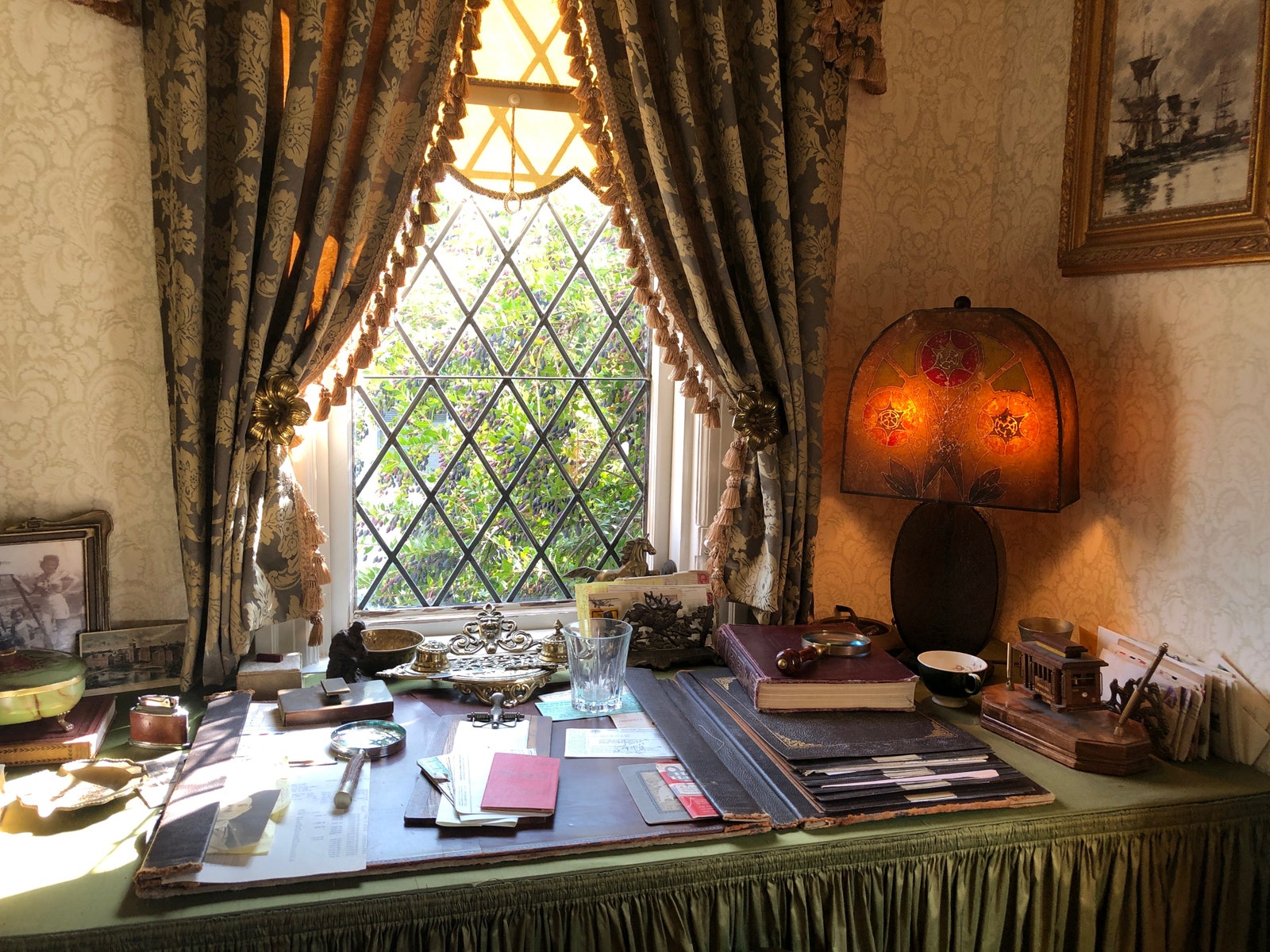 The set decor proves that beauty is in the details, and character clues are abundant. Attorney E.B. Jonathan’s (John Lithgow) Hancock Park Tudor estate tells the backstory of a man whose wife left him, and whose finances were dwindling. “Since the character came from San Francisco with his wife, I wanted something Tudor as it was familiar, and he would have gone that route. He is down on his luck, running on fumes, and the house had to show that. Downstairs, the rooms are all dressed, but upstairs, it is empty, as if he had to sell off his furniture,” says Goldsmith. 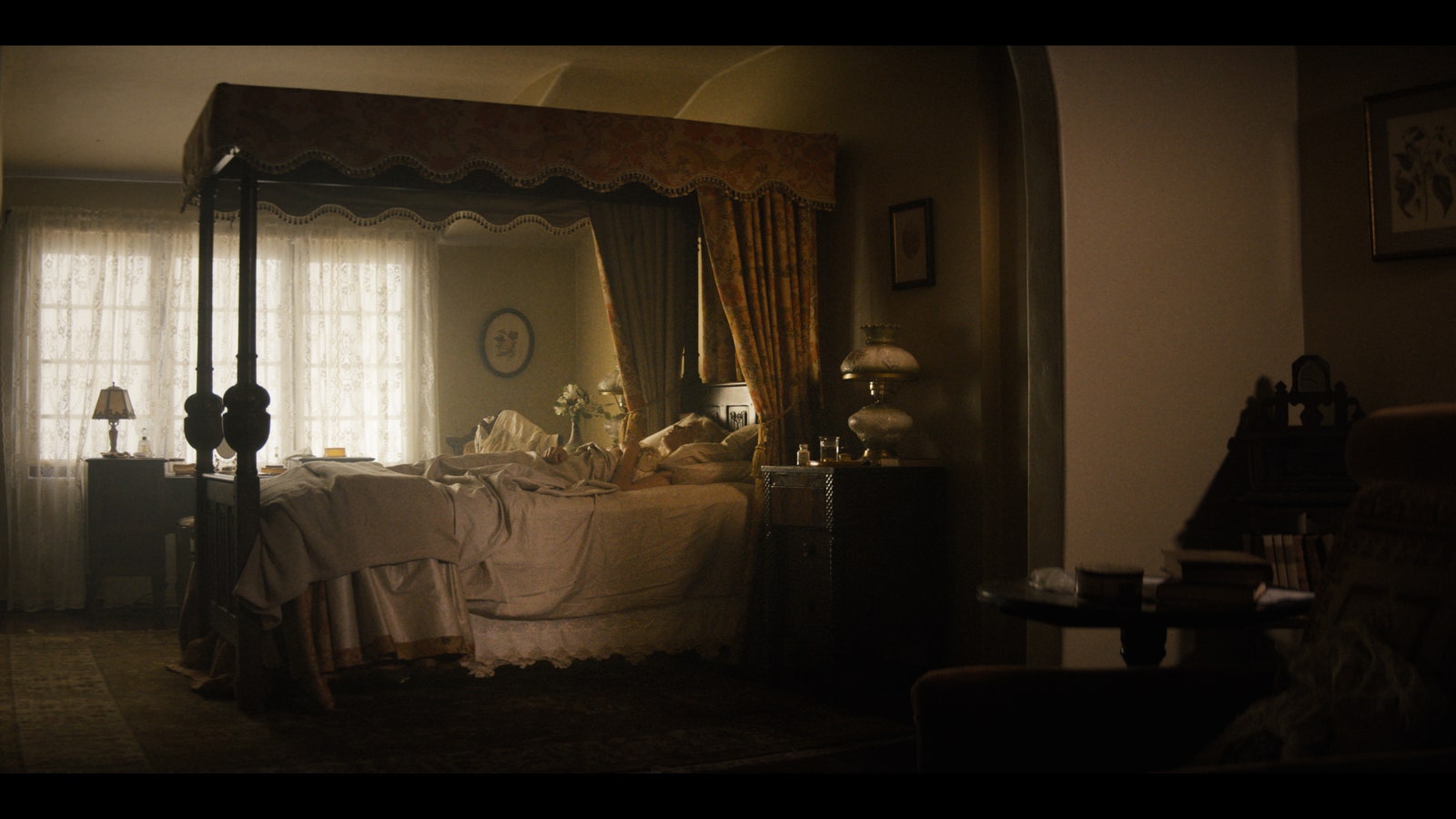 Siwolop shopped on Etsy, eBay, Craigslist, and at the antique markets in Whittier and Pomona, California, for the set’s period pieces, and her favorite set was Sister Alice’s bedroom. That room in the McKeegan Mansion set features a charming canopied bed that was chosen for its angelic quality, denoting the bedroom of a little girl who is still looked after by her overbearing mother. The color red and Spanish-style furniture are the main components of the downstairs decor, as it reminded the set decorator of a church interior.

The show’s design is a lesson in history that pays homage to Los Angeles’s past. As Siwolop concludes, “What I love about L.A. are these architectural gems that you have to scratch the surface and dig to find. It gave me an appreciation for the history of the city that most people don’t know about.”